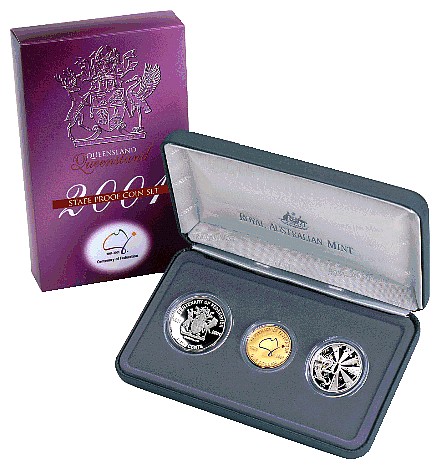 Jenifer Gray of Ingham designed the coin as part of a special series produced by the Royal Australian Mint to commemorate Australia's Centenary of Federation.

Jenifer, who completed year 12 at Ingham State High School last year, developed her unusual and beautiful design in response to a national competition run by the Royal Australian Mint during late 2000.  Her design was selected from over 500 entries from approximately 170 schools throughout the State.

The uniquely Queensland design depicts the progress of the State, with a clock-face in the background, and its beginnings represented by a gecko.  The transformation of society over time is symbolised by footsteps changing to shoeprints as it journeys towards an age of technology represented by a computer chipboard.  The 20c coin featuring Jenifer's design, a 50c piece depicting the Queensland Coat of Arms and a $1 coin showing the Centenary of Federation logo are combined in a Three-Coin Set for Queensland.