2014 G is for George One Dollar Uncirculated 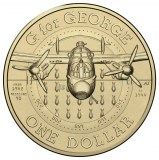 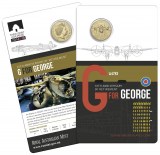 2014 G is for George One Dollar Uncirculated

‘G for George’ was an active Avro Lancaster heavy bomber which was constructed in 1942 and flew 90 operational missions over Nazi-occupied territory
during the Second World War. Its affectionate nickname was the result of the prominent ‘G’ in its squadron code, and the plane was both empowering and uniting for over 10,000 airmen.  Servicemen crewed this aircraft in RAF Bomber Command until its retirement in 1944. It now sits proudly on display in the Australian War Memorial’s ANZAC Hall, as an embodiment of the strength, endurance and sacrifices of those who served in the war. On the 70th anniversary of its retirement, this
coin serves as a lasting memento of its iconic service.

Packaged in a card featuring the plane schematic and images of the 90 missles displayed on the side of G for George representing the number of
missions it flew. Packaging features the Australian War Memorial’s First World War centenary logo. Coin’s reverse features ‘G for George’ against a
background of missiles dropped by the plane.

Back to: One Dollar Coins